COVID-19 Coronavirus Message Updated: 17th September
Mail Order Customers:
* Our carrier DHL is operating near normally across the world. Allow an extra day for delivery (2 days for Australia, 6 days for New Zealand), just in case. However, regular international postal services can have additional delays, and are not recommended for anything required within 6 weeks.
* For the UK only, Royal Mail are delivering the vast majority of orders on time according to our data, but is experiencing higher levels of staff absences, so there may some local delays.
* We will be working normally and have a large warehouse full of parts that will help keep your car on the road. However, we are beginning to see supply delays from factory lockdowns around the world.
Workshop Customers:
* Following government guidance, we are open as usual. Taking your vehicle to a garage for repairs is a permitted activity (safety) as long as you observe the social distancing rules. We have strict social distancing processes internally and disinfect daily (not least because we have staff in vulnerable groups). In the circumstances, we have had to close our waiting room. Our mechanics wear gloves at all times and we will disinfect your vehicle with our Zaflora sprays on handing back to you. We would respectfully ask you to show our staff the same courtesy. We also have full amount contactless payment systems.
* MOTs due for renewal from 30th March to 31st July will be extended for six months. However, you are still legally obliged to keep your vehicle in a safe and roadworthy condition, so if you need to use your car in this period, it is still strongly recommended to get one done. 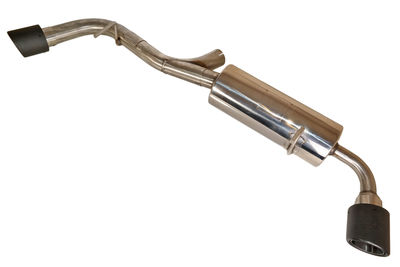 The Alfa Workshop, working closely with Quicksilver exhausts have developed a selection of performance exhausts for the Alfa 4C, with a clear goal, to increase performance, tune the exhaust tone, and reduce weight. Although something of a black art, there is also a high degree of scientific theory and maths that has to be used to achieve this.

So first the theory, in order for a performance exhaust to work you are relying on the momentum of each pulse of gas to create a low pressure area behind it to help extract the following pulse. To create the maximum possible momentum for each pulse of gas you need to keep the speed of the gas as steady as possible, you will note that Alfa Romeoâ€™s 4C race exhaust changes from one large pipe to two smaller pipes in order to maintain the speed of the gasses in the exhaust.

The lightest system would have meant using only one exhaust pipe, something we didnâ€™t feel owners would want, this has left us with the problem of what to do with the other exhaust port in the bumper.

So in order to keep the gas flowing in the main pipe we have added another smaller pipe at an acute angle to the gas flow, this pipe is much smaller in diameter than the main pipe and has almost no effect on the flow in the main pipe but being a smaller diameter with a higher speed of flow it adds a second note to the exhaust noise which creates a depth to the sound. This is a secret that Quicksilver have used before on their supercar systems.

However as with all of the straight through systems on the 4C you get a resonance at around 2800rpm (roughly 80 mph or 130 kmh in top gear) this is because that is the perfect tuned length for the 4C exhaust system.

In order to eliminate the drone while keeping the rounded powerful sound of our exhaust system you can either purchase the system with a helmholtz resonator or add one later, this simply fits on in place of the smaller pipe, this completely removes the drone and makes the car a lot less tiring to drive at motorway speeds, without detracting from the performance benefits of a straight through pipe.

And for all you speed freaks we offer the ultimate lightweight performance system weighing in at less than 2kg without resonator (Alfa race system is 4.55kg) using titanium technology. This has all the advantages of the standard stainless system, you can even add a resonator if required, while it weighs almost nothing, perfectly in keeping with the ethos of the 4C.

If you would like to book yourself in, the price of this service in our workshop for the Super Sport is £541.56 or £891.00 for the Helmholtz.