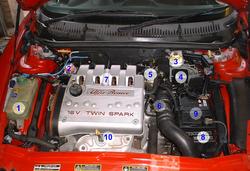 In this article, I am going to try to run around the engine bay of a modern Alfa Romeo and tell you what is in your engine bay and try to give you an idea of how it works

1- Header tank for engine cooling. This contains a mix of 50/50 water and antifreeze. Antifreeze is a mixture of ethylene glycol or related compounds and corrosion inhibitors. This does three things, first, it stops the car from freezing, second, it stops the inside of the engine corroding and thirdly it raises the boiling point of the coolant to around 135 degrees centigrade with a pressure cap which releases at 1.5 bar. Incidentally, ethylene glycol was originally used in the Merlin aero engine that powered the Spitfire which had problems with cooling during its early development.

2 - Power steering reservoir. This contains ATF Dextron II it is connected to a pump, in this case immediately below it which is regulated to a specific pressure in order to give the correct weight to the steering while not eliminating feedback from the steering rack. The fluid is specifically designed not to foam as this would make the pump noisy. The fluid has to be kept below 100 degrees centigrade and to do this on a 156, 147 and GT there is a cooling coil visible if you look under the offside of the front bumper.

3 - Brake fluid reservoir. This contains brake fluid, this is a form of hydraulic oil, it is designed to absorb water and it needs to have low viscosity even at very low temperatures, it must not freeze. Dot 4 brake fluid has a minimum boiling point when new in excess of 230 degrees centigrade, this stops the heat generated when you brake boiling the fluid. If the fluid boils it becomes a gas and this is then compressible and your brake pedal will not work. The fluid absorbs water so in case of contamination with water the boiling point of the fluid is still considerably above the 100 degrees centigrade that a drop of water in the system would boil at. The fluid needs changing occasionally because it will have absorbed water and that lowers its boiling point.

4 - ABS control unit and pump. This could easily take up all of this article and more, the control unit is a small computer mounted on the side of the â€œpumpâ€. It compares the speed of all the wheels which are monitored by four small pulse generators (which is a coil of wire wrapped around an iron bar) on each wheel. The computer monitors the relative speed of each wheel and when the brake light switch is operated, if it detects a discrepancy of more than around 15% between any of the wheels it removes a tiny amount of fluid to an accumulator and then in less than 20ms re-applies the pressure to the wheel in question. This gives you the vibration through the pedal you may have sometimes experienced. If you really do get in trouble the computer then resorts to other pre-planned strategies in order to save your bacon. On a car with vehicle dynamic control (VDC), the ABS computer is connected to a device that measures sideways movement, from that the computer can apply the brakes independently in order to steady the car if you have to swerve in an emergency. On some models, the ABS computer also reports to the engine computer and if it detects wheel spin it reduces the amount of throttle to stop the wheel spin and you have anti-slip regulation (ASR), a very clever system!

5 - Engine management computer. This is another system that I could easily write pages and pages on, the computer takes information from various sensors all over the engine which gives it information on temperature, amount of air being drawn in, crank angle position, camshaft position etc from that information the computer sends signals to the injectors, coils, variator and modular manifold in order to make the engine run in the most efficient way.

7 - Modular inlet manifold. This is used to improve both torque and power, in simple terms the length of the inlet trumpets can be changed. Air has mass and anything that has mass has inertia. By changing the length of the manifold the inertia of the air can be adjusted throughout the rev range. This helps air pressure to build upon the back of the inlet valve when it is closed, This added pressure gives improved cylinder filling when the valve opens, this also helps to keep the inlet charge free from exhaust gasses which can leak back due to valve overlap this gives a cleaner burn which reduces emissions.

8 - Relays. These are used to switch high current users like fuel pumps and electric fans on and off, the engine management control unit can only switch small currents as it uses diodes to do the switching while the fans etc take too much current for this to be viable.

9 - Battery. This is a chemical storage device for electrical energy. The battery in your car is 12 volts, there are 6 sections in the battery each producing 2 volts. The cells are connected in series, if one cell goes your battery has failed and you will need a new one. The battery contains sulphuric acid either as a liquid or a gel and lead plates, there are microporous insulating plates between all of the lead plates to stop the lead plates from coming into contact with each other. A car battery is quite harmless to us and you can put your fingers across it without a problem, however, if you short circuit it with a metal object it can deliver massive currents very quickly and will heat the object you put on it to hundreds of degrees centigrade so be careful.

10 - Dipstick. This is a reminder, please check your oil today and remember the car has to be level and the dipstick should be withdrawn cleaned and then reinserted to get a good measurement. If you are not sure DO IT AGAIN, Alfa's take approximately 1 litre between min and max.

Related Links: Getting the best out of your Garage | The Alfa Romeo JTD engine | Alfa CF1/2/3 Engine Identification | Diagnosing a MAF problem