COVID-19 Message Updated: 3rd Sept
Mail Order Customers:
* Our carrier DHL is operating near normally across the world with its Air Express service. Allow an extra day for delivery (4 days for Australia and New Zealand), just in case.
* For the UK only, Royal Mail are delivering the vast majority of orders on time according to our data, but is experiencing higher levels of staff absences, so there may some local delays.
* We will be working normally and have a large warehouse full of parts that will help keep your car on the road. However, we are seeing some supply delays from factory lockdowns around the world.
Workshop Customers:
* We have strict social distancing processes internally and disinfect daily (not least because we have staff in vulnerable groups). In the circumstances, we have had to close our waiting room. Our mechanics wear gloves at all times and we will disinfect your vehicle with our Zaflora sprays on handing back to you. We would respectfully ask you to show our staff the same courtesy. We also have full amount contactless payment systems.
* In these times of fluctuating demand, it's highly advisable to book your vehicle in earlier than usual. We are currently very busy indeed. 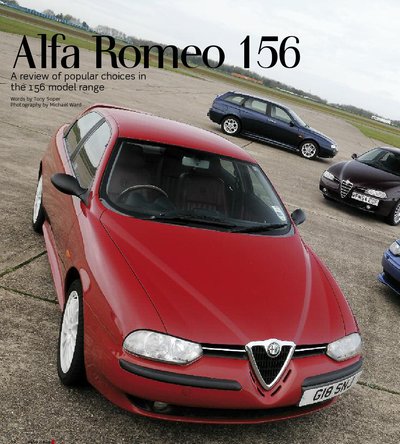 Imagine if the Alfa Romeo 156 we know and love never existed â€“ what would have happened? Letâ€™s pretend that the successor to the frankly mediocre 155 was yet another in a long line of Alfa oddballs: quirky, pretty from some angles, strangely interesting, but not something you would dare take home to the family. It might have sold reasonably well in Italy, because in the â€™90s they still made a bit of an effort to run the domestic product, but in the rest of Europe Alfa would have entered a slow decline. After a couple of years the company would have been on its knees, forced to withdraw from right-hand drive production and eventually consigned to a niche role supporting Fiat â€“ like Lancia. Apocalyptic stuff, but 13 years on, Alfa Romeoâ€™s future is still looking shaky, with annual sales slipping to just 103,000 last year â€“ thatâ€™s easing into Saab territory and they came to a rather sticky end.

But the 156 does exist and fortunately itâ€™s a corker. It looked astounding when we first glimpsed it back in 1997, and very little matches its beauty today. Bodywork thatâ€™s crisp and taut, yet still allows fluid lines, and only the familiarity of over a decade in its company masks just what a monumental job Walter Deâ€™Silva did when he penned it.

In fact, itâ€™s probably no exaggeration to regard the 156 as Alfaâ€™s saviour. Back in 2000 they sold over 200,000 cars worldwide; most of them were 156s and between 1998 and 2005 they shifted a little over 42,000 of them here in the UK. These were crucial sales, many to first-time Alfa buyers, lured to the marque from their beloved VWs, Audis and even BMWs. Sadly, Alfa rather squandered the legacy, tarnishing the initial experience with dodgy aftercare from indifferent dealers and a hopeless over-estimation of just how long the timing belts on their engines would last. Many went back to Germany for their next car, having been stung by high running costs and woeful residual values. With the 159 not really cutting the mustard, itâ€™s the MiTo and the recently unveiled Giulietta that must once more save Alfa. So, 12 years later, should you buy a 156? The good news is that there is something in the range for every need, the bad news is that the number of straight and clean cars for sale has dipped noticeably in the past year or so, but at the moment there are still plenty around. We know from MOT statistics recently released by VOSA that just three years ago 28,232 156s of all types were still on the road and passed the MOT test. Itâ€™s a good bet that more than a few have fallen victim to the government scrappage scheme since then or have simply been sent to an early grave by creditcrunched owners who canâ€™t afford repairs. Alfa parts prices donâ€™t help, and recent rises of up to 40 per cent mean that original equipment items can easily exceed the value of the car itself. How about Â£320 plus VAT for a replacement coded key!

Nevertheless, Autotrader has some 400 156s currently on offer, ranging between Â£600 and a whopping Â£14,990, whilst a further 260 can be found on the most popular auction site. Cars first registered between 2000 and 2003 will be most plentiful, because by 2004 sales were slipping and just a handful were sold new in 2005.

WHAT TO LOOK FOR

The two petrol (V6 and Twin Spark) and two diesel (1.9 four-pot and 2.4 five-pot) engine types are all very good, but they do have some serious flaws. Twin Sparks can drink so much oil that the level gets low enough to run a bearing. Listen for an aggressive taptap-tap â€“ that will be the piston whacking the cylinder head because the big end is shot. If it sounds like a diesel, itâ€™s the inlet cam phase variator. Itâ€™s worth treating the variator as a consumable and changing it with the timing belt and idler pulleys. Ah, the cam belt. Many 156s have met a premature end due to failure of the timing belt. If it lets go, most of your 16 valves will meet the pistons, meaning a repair bill of at least a thousand pounds.

Wildly inaccurate expectations of durability meant that in 2006 Alfa had to concede they had a serious problem on their hands. Smarting from a barrage of warranty claims and goodwill payments to furious owners, they cut the recommended change intervals from 72k miles to a much more conservative 36k or three years. The V6s are less prone to belt failure, but the water pumps have a depressingly short life because the plastic impeller gradually disintegrates, so do check for signs of overheating. Rough running? That will be the oh-so-delicate mass air flow sensor. We canâ€™t really blame Alfa for this one â€“ itâ€™s a Bosch part that is shockingly unreliable, a problem that afflicts a number of different makes as well. Bosch remains unsympathetic, and still wants some Â£200 to replace a component that really should last the life of the car. We took the opportunity to revisit four of our favourite versions of the 156 to see if they still make sense as a second-hand buy today.

Donâ€™t ignore the most basic model in the range â€“ itâ€™s so much lighter and more agile than the rest. Despite giving away loads of horses and torque, once on the road it keeps its much more powerful siblings honest on a point-to-point run. Itâ€™s refreshingly agile and when driven spiritedly it feels alive, balanced and offers plenty of grip and feedback. This really is an ideal first Alfa for the younger driver because the insurance group is a lowly 11, and with prices from just a few hundred pounds for early cars, rising to a maximum of Â£3500 for a top condition face-lifted 2005 model, they offer budget fun. The 1.6 Twin Spark supplies 118bhp at 6200rpm, the engine is similar to the larger-capacity 2.0, but it does without the complexity of a balancer shaft. The featured red 2000 model is rather unusual: having been fully specced by the first owner, it has red leather seats with matching interior trim and pretty much every other available option fitted â€“ a rare find, but similar cars will be out there.

GOOD ECONOMIC SENSE
The JTD 156 offers awesome fuel economy given the size of the car â€“ easily 40mpg around town and 55mpg for motorway cruising. Also, a lowly CO2 rating of 157g/km means vehicle excise duty is just Â£155. Not so exceptional in a brand new car maybe, but this fiveyear-old 156 can be yours for well under Â£4000. The JTDs are so good that the fact that itâ€™s a diesel is only apparent on start-up; otherwise, such is the refinement that you could easily mistake it for a petrol engine. It will happily rev to 5000rpm and make over 120mph at the top end thanks to a creditable power output of 140bhp. A bargain and very smart daily driver.

WORKHORSE
Make no mistake, a V6 Alfa is always going to be pricey to run. Fuel consumption will be in the low twenties, road tax is an unpalatable Â£245 and with CO2 emissions of 283g/km you will have to forfeit your summer holiday in the sun to offset such irresponsible motoring and salve your environmental conscience. Because the prices of older 3.2 V6 Alfas are heading south, just Â£2500 should net a beauty, so if you offset the low purchase price against future running costs then the joys of a V6 can be yours. There is a seamless and linear delivery of creamy power with an intoxicating throb, pulling cleanly to 7000rpm. With 192bhp there is plenty of power to arrive at 140mph, although torque is a bit weak â€“ but driving any V6 Alfa is a joy and a used 2.5 Sportwagon could be a good family workhorse if your annual mileage is not too high. The extra weight of the V6 stresses the suspension, so listen out for clonks from worn bushes, but expect it to feel quite softly sprung when really pushing on.

COLLECTORSâ€™ CHOICE
The GTA does what it says on the tin, and then some. Itâ€™s an icon and clearly the one to collect, but prices reflect that. Expect to pay from Â£7500 up to Â£12k despite what the price guides suggest. Itâ€™s wise to look for the best and keep it that way. This one has a Q2 diff, a nice and unobtrusive upgrade that stops the ASR lamp from glowing quite so much, and being the slightly heavier Sportwagon does not degrade the heady experience of 250bhp with the potential of 155mph. GTAs never got the face-lifted nose job, so they can look a little dated but donâ€™t let that worry you, and do watch for bubbling and degraded trim on the roof, doors and the leading edge of mirrors where corrosion occurs under the coatings. Minor points, but they often mar an otherwise perfect package.

Other articals in this edition of Auto Italia were

Reproduced by kind permission of GHPublications
Copyright CHPublications Ltd All rights reserved. Reproduction in whole or part, including pictures is prohibited