Tappet adjuster you rotate the running face to adjust the clearance

Distributer drive flange on the rear of the exhaust camshaft

A piston that has had a very hard life

The engine with its new pistons in the bores

Insid the block, note the replacement bearing cap we fitted 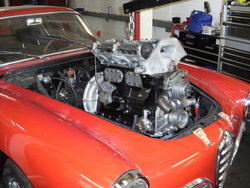 The 4C 1900 engine is really the last Alfa Romeo engine that shared a lot of features of the great pre-war cars, it can trace its roots back to the 1750, the 2300 and the 2900's amongst others. The next generation of engines found in the Giulietta onwards use a bucket and shim to adjust the tappet clearances and all share a common architecture. The engine produces up to 115 bhp at 5500 rpm in TI guise from its 1884 cc. The 1900 was the brainchild of Dr Orazio Satta Puliga and it was his first project as Alfa Romeo's senior engineer.

The top picture on the right-hand side shows the top of the valve and the tappet adjustment, to adjust the valve clearance you depress the valve using the outer collar and then you screw the centre running face in or out to adjust the clearances, this was accepted practice for Alfa Romeo's up until this time.

The engine has flat-topped pistons and this helps to compress the mixture and improve the distribution of fuel through the charge. This was dropped on all later engines until the introduction of fuel injection on the late S3 spider in around 1988. If you look at the picture of the piston on the right you can see the damage caused by the ingestion of some part or other, it just goes to show you can't be too careful.