Artists impression of the new Duetto

Side view of new duetto

Is this the new Duetto? 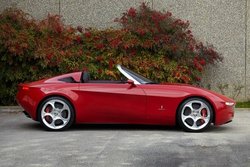 Update 19/5/10 When you have spent a few years looking at all the wonderful creations that get presented at the different motor shows around the world, see all the new concept cars come and go like the Alfa Romeo Pandion, styled by Bertone, you can get a little blase and think that none of them will ever make production, however something about the Spider concept from Pininfarina makes me think that it will actually be the next production Alfa Romeo Spider. The concept has the look of a production car, the proportions suggest that it could be front-wheel drive and so I suspect it could be based on the same engines as the new Giulietta. However, it would be a very nice departure from the normal if it was a rear-wheel-drive but the lack of much rear overhang suggests that this won't be the case.

So what is the specification likely to be? I would suggest that the running gear will be based on the new Giulietta which will mean that it will have all the little trick bits like the DNA adaptive suspension system, note the little lever behind the gear lever. It will also have the new Multi air engine with the top-of-the-range version probably producing around 250 bhp. Suspension is probably going to be Mc Pherson strut at the front with a multi-link design at the rear, this will be specifically tuned to the Spider chassis, dynamically it is unlikely to be as driver-orientated as any coupÃ© which may follow. There may be a number of different versions available however it is unlikely that there will be an out and out sport version as the chassis is going to have more flex than the Coupe

The New CEO of Alfa Romeo Luca De Meo has announced that the new small spider the "Duetto" will be produced to celebrate Alfa Romeo's centenary in 2010. With all the name changes and rumours we have had over the Mito don't expect the car's name to remain the same, they could easily change it. However whatever name they choose it will be good to have a small powerful convertible in the Alfa Romeo range and with an expected 230 BHP on tap in a smaller car, it is going to impact on the Brera Spider's market so I would expect a "GTA" version of the Brera to be in production before this model is released and I think it will be producing in excess of 300 BHP.

As always there are rumours that Alfa Romeo will make this model or that model and often there is not a grain of truth in them, however, I believe there may be some substance to the release of the new Duetto. It was hinted at by the CEO of the time, Antonio Baravelle, in a speech in late 2007 and these rumours persist. It will probably be based on the 149/Junior chassis and will be smaller and lighter than the Brera Spider as it will have to be in a different market sector. A lot of the blogs are comparing it to a Mazda MX5 but it would probably be fairer to see the Fiat Barchetta as its forbearer as that was also a small front-wheel-drive convertible.

Alfa Romeo's new CEO, Luca de Meo, has been widely credited with the phenomenal marketing success of the new Fiat 500, and he's generally considered to be the brightest thing in car manufacturing at the moment. So if the Duetto should ever make it into production, de Meo is the man to make it fly. Especially if Alfa Romeo's plans to re-enter the US market are realised.

The Duetto is likely to be launched to coincide with Alfa Romeo's centenary in 2010 and will probably share all the same engines and running gear with the Junior and 149. The Duetto is unlikely to get the smaller engines in the UK and so I would expect to see 1.8TB engine with 184 bhp and a 230 bhp variant and they may well throw in one or two diesel engines. There is also likely to be a choice of manual or the new twin-clutch and snappily named C635 Dual Dry Clutch gearbox, this is a system along the lines of the Volkswagen DSG gearbox and it has amazingly quick gear change times as it already has the next gear engaged and just needs to let the relevant clutch out.