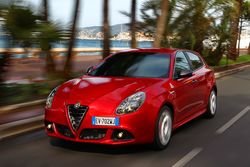 Generally the Giulietta has been a very reliable car, however like all cars it does suffer with a few specific problems. Firstly, and most commonly, there is an issue with the wiring between the tail gate and the body. If the boot is used regularly the wiring between the two will eventually break, this can cause all sorts of issues from the rear wiper not working, the radio losing reception to the tail lights not working. This entails replacing the section of wiring loom between the body and the car which is a surprisingly expensive repair.

The diesel Giulietta can get coolant leaks from the exhaust gas cooler system. In order to re-burn the exhaust gas to reduce the emissions it is necessary to cool the exhaust gas so it is fed through a water cooler, the EGR valve plastic housing on this has been known to crack.

On higher mileage petrol versions there can be a problem with the multiair system. It is important to check the service history and to use the correct grade of oil. If the service history is poor or the wrong grade of oil has been used there is a chance that the multiair unit will fail at around 100,000 miles. This can fail in one of two ways, either it will have a miss fire at low revs which disappears as you lift the revs or it will have clatter/rattle from the camshaft area of the engine.

Check the tyres for uneven wear, especially on the rear. If the rear tyres are showing signs of unusual wear you will need to have the rear geometry checked and adjusted.

There can also be problems with the petrol flap release solenoid, this can stick either open or closed and if it fails it will need to be replaced. There is an emergency petrol flap release in the boot which is operated by the red cord on the right hand side of the boot.