I dont know, but she looks good 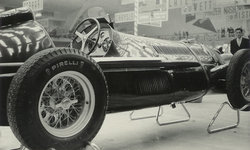 A brief history of the Pirelli Cinturato

Later the Giulietta and Giulia Alfa's were fitted with the 155R15 Pirelli Cinturato which today is available in an S or H speed-rated tyre. The H tyre has recently been DOT and E-marked to make them perfect for road and track use. The 155R15 Cinturato was the tyre used by Alfa up until 1969/70 when they changed to the 165R14. All being well the 165R14 will be reproduced next year and like the 155HR15 will have the H speed rating DOT and E-markings

These tyres are available directly from Longstone Tyres Pirelli's distributor who offer free carriage in the UK, and at present, the UK VAT rate is only 20%

This is a free advertorial for Longstone Classic tyres, they are an independent company and as such we do not endorse their services......etc, etc, bla, bla. If your company/organisation has something interesting to tell our customers and it compliments our website please feel free to email us with your content